Why Natural Immunity Is Better Than Vaccination When left to its own devices, the mammalian immune system is perfectly capable of good health. Especially without the intrusion of vaccines, drugs or processed dead foods. A healthy mom, her colostrum, breast milk and the probiotics it contains are all you need. This is the primal defense.

When a nursing pup needs extra immune help, breast milk provides what the puppy needs. It will even turn a darker yellow becoming almost a serum color. And it will give the puppy the necessary immune factors to fight whatever is coming his way.

Vaccination became a wonderful boon of money for conventional doctors. Way back when Edward Jenner decided to push the jabs, it wasn’t based on anything scientific.

But it was based on assumption …

There were four cases – two of Edward Jenner’s and two from his nephew. This didn’t exactly make for a proper peer review! Those making money from that first franchise encouraged a grant for Jenner. It would support him in this money-making venture.

But now we can see how these assumptive man-made plans had a direct effect on our dogs.

You may not remember this, but I do … in the early 1980s, Rottweiler and Doberman pups were dying after their vaccines. The vaccine antigens neutralized the mom’s antibodies. There was a call against breastfeeding “so the vaccines will work.” Because mammalian offspring were already protected. But man wanted the manufactured false immunity to be vaccine-delivered.

And if it wasn’t for vaccines, many diseases vets vaccinate for wouldn’t exist.

Parvovirus is a good example. Parvovirus is a “small” virus like the feline panleukopenia or feline distemper virus. In fact, they’re the same virus.

You see, they made vaccines using feline kidney cells that contain a high number of viruses. Over time, the feline panleukemia virus started to infect dogs. Dr Deva Khalsa wrote about this in Villains In Vaccines, in the January 2016 issue of Dogs Naturally Magazine …

“The vaccine stocks had long been contaminated with a cat virus. When you purchase a vaccine for your dog you get the viruses and viral components you asked for. You also get some antigens that you didn’t ask for or ever want.

As I understand it, pharmaceutical companies don’t worry too much about cat, cow or sheep viruses contaminating a canine vaccine mix, as dogs don’t usually contract these diseases anyway. But the sudden and devastating outbreak of parvo was because the feline panleukopenia virus (FPV) that had long been present in dog vaccines, mutated to a form that could jump species and infect dogs!”

Parvo didn’t emerge as a mutation from a point zero … it emerged at the same time on several continents where they gave vaccines to dogs. The vaccines were the source of the parvovirus.

Canine influenza has a similar origin … a genetically engineered virus sprayed up the nose of horses in Florida. It made a full evolutionary jump into the dogs who were with the people working the racehorses. And it affected the greyhounds who raced in the same location.

Whenever a species first meets a “new” virus, there’s trouble and the mortality rates are high.  But immunology expert Ronald D Schultz PhD pointed out that some unvaccinated dogs were surviving parvo. That’s because the mammalian immune system protected them from it..

Enter herd immunity. This concept is much misunderstood by conventional doctors and the media. They incorrectly attribute it to successful vaccination.

Vaccinations don’t do this.

The immunity or antibody that comes from vaccination is not natural … it’s artificial. This means it may not work at all. Not to mention the many toxic ingredients contaminating the vaccines:

I‘ve seen recalls on rabies vaccines for contamination with candida. And for “failure to inactivate the virus.” Rabies is such a lethal virus … isn’t it alarming that the vaccines have these problems?

And the natural system is already made to handle viruses like rabies. Maternally derived rabies antibodies can last 3.5 months in puppies. And these are research-based numbers.

Maternally derived parvo antibodies also last a long time – even 4 months in some pups. I personally tested a Bichon puppy at 6 months. He had no rabies vaccination but plenty of neutralizing antibodies against rabies.

The protection from the mom’s antibodies is why Dr Schultz recommended a “one and done“ vaccination protocol of distemper and parvo at 4 months. This is the time when the mammalian immune system is usually forming its own immunity. Up to this point, it’s supported by the mom’s colostrum and breastmilk.

RELATED: Everything You Need To Know About The Parvovirus Vaccine …

What no one is safe from is the genetic engineering and manipulation of pathogens. Now we find out that man-made radiation makes some pathogens stronger. These include …

And at the same time, it makes the mammalian immune system weaker. What are we supposed to do?

We’re learning about all these routes to environmental toxicity. And they affect the immune system’s ability to do its job. And it turns out it isn’t only vaccines.

Horses have an average lifespan of 25 to 33 years. But I recently heard of a cavalry horse who lived to 43 years old. Buck, Ben Cartwright’s horse in Bonanza, lived to 45. Another horse, Ben the Barge Horse, lived to be 63.

Horses are mammals too. So what has changed that caused the loss of this healthy mammalian immune system? What I see is the intrusion of conventional medicine. It brings unneeded vaccines, poor nutrition, and the onslaught of environmental toxicities. Not to mention the genetic engineering of the viruses as well as our foods.

Nature Does It Better

I have a client who breeds naturally raised dogs. She doesn’t vaccinate. If she somehow loses a litter to parvo or distemper, she realizes it’s better to lose individuals with weak genes than to raise a litter with those weak genes. It sounds harsh … natural selection is a hard medicine to take.

But  that’s what we need … good solid individuals, good genes, and strong genes. Not manipulated genes from artificial immunity and manmade assumptions.

We know many of the so-called “breed diseases” that never existed … until vaccines and processed foods came along. The way to recapture healthy dogs is to raise them naturally, not artificially.

Tip: Soil based probiotics can help remove heavy metals and other contaminants from the body.

Natural breeders can get very healthy dogs. But they need to breed out the artificial that man manipulated into them. There are breeders doing this and I’ll celebrate the day when this is the norm.

Naturally reared individuals will be the ones to save the species. They have an immune system that developed over millennia. If man had not meddled … the immune system would have taken care of it. Patricia Jordan, DVM
Patricia Jordan DVM is a 1986 graduate of the North Carolina College of Veterinary Medicine. Dr Jordan found holistic medicine in 2000 at the AHVMA American Holistic Veterinary Medical Association Conference. She completed a Master's Program in TCVM Traditional Chinese Veterinary Medicine with Dr Xie of the Chi Institute and Dr Richard Pitcairn's Professional Course for Veterinarians has opened the way to naturopathic medicine for Dr Jordan. Visit Dr Jordan's website or book a consultation with her at Dr-Jordan.com
More Articles

Patricia Jordan, DVM
Patricia Jordan DVM is a 1986 graduate of the North Carolina College of Veterinary Medicine. Dr Jordan found holistic medicine in 2000 at the AHVMA American Holistic Veterinary Medical Association Conference. She completed a Master's Program in TCVM Traditional Chinese Veterinary Medicine with Dr Xie of the Chi Institute and Dr Richard Pitcairn's Professional Course for Veterinarians has opened the way to naturopathic medicine for Dr Jordan. Visit Dr Jordan's website or book a consultation with her at Dr-Jordan.com
More Articles 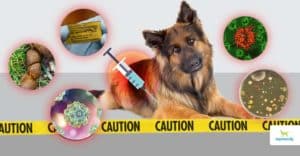 Harmful Dog Vaccine Ingredients – What You Need To Know Contact Us | Privacy Policy | Terms Of Use
Ⓒ 2022 - Dogs Naturally Magazine Inc. The content on this website is not meant to replace veterinary advice. Please support the hard working holistic vets who make this information possible. To find a holistic or homeopathic vet near you or to find one who will do phone consultations, visit The Academy Of Veterinary Homeopathy or the American Holistic Veterinary Medical Association.
[class^="wpforms-"]
[class^="wpforms-"]